This past September 20th saw the presentation of the National Preaudience on the Devastation of the National Hydraulic System in Mexico.  The hearing was an incredible experience, with 13 cases presenting over the course of the day.  Roughly 500-600 individuals attended throughout the day.
Despite the wonderful attendance, many were unable to attend in person.  For those unable to be present, there is a wealth of information available about the hearing, as well as about the case presented by the Coalición en Defensa de la Cuenca de la Independencia (CODECIN).  Some of those materials will be shared here in this space. 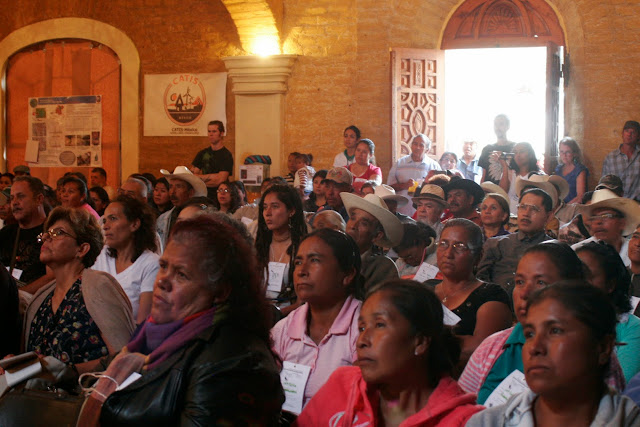 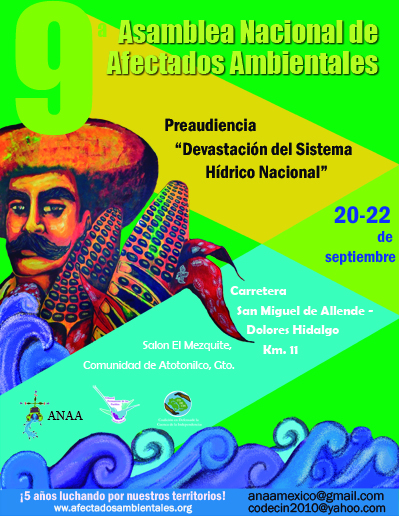 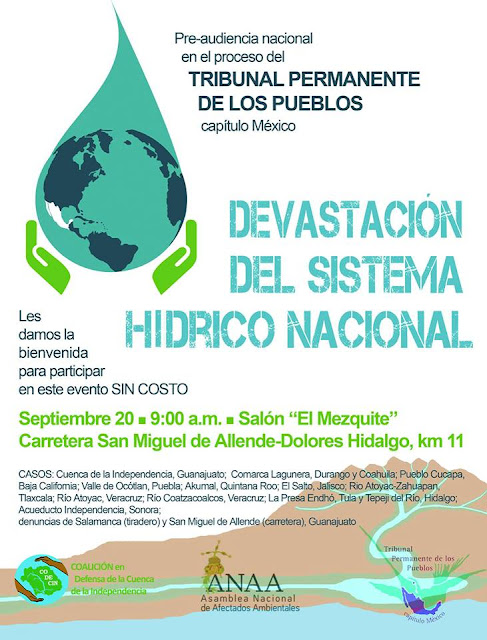 National Session of the Permanent Peoples’ Tribunal to be held in Guanajuato, Mexico on the Issue of Water

The theme of the session will be the national hydraulic system of Mexico, with a special focus on the case of the Independence Aquifer located in the northern part of the state of Guanajuato.

A brief audio clip has been released, announcing the event and its location.  That audio clip, in Spanish, is shared here:

More details to be released soon about the event.

Legal systems are established to deliver justice to wrongfully injured parties.  Nevertheless, in societies around the world, the law is frequently used to impede, rather than to facilitate, access to justice.  In such situations, the State might use its attributes and powers to benefit private interests that are contrary and prejudicial to public interests.  The Mexico chapter of the Permanent Peoples’ Tribunal (PPT) characterizes this phenomenon -- of private interests’ co-opting a State and diverting the State’s resources to private, rather than public, needs -- as “desviacion de poder”: that is, “misuse of power.”[1]

General Structure of the Mexico Chapter of the Tribunal

The Tribunal held a general introductory audience during May 2012 in Ciudad Juarez in the state of Chihuahua.  At this audience, the Tribunal listened to communities and organizations present evidence on the destructive relationship between free trade policies and the seven thematic audience topics.  The Tribunal issued a finding at the end of the general introductory audience about the results of the hearing and initiated the seven thematic audiences.[3]

Each thematic audience will involve a hearing devoted to one of these topics, considered in relation to the structural violence produced by a free trade, neoliberal economic model.  For example, the Tribunal’s judges will hold a separate hearing on the violence inflicted on women by this economic model.  The Tribunal’s judges will also hold a separate hearing on the environmental devastation caused by free trade neoliberal policies.

During the separate thematic audiences, the goal is to reveal the relationship that each theme has to violence generated by free trade neoliberal economic policies.  The Tribunal encourages the presenting of witnesses’ testimony at each audience, but does not require it.  Each thematic audience lasts about a day and a half or two days.  The judges issue a finding that is made public at the end of the audience.  Because the Tribunal is a public opinion court, the findings do not legally bind the State or individuals.  Nevertheless, grassroots movements and organizations may use the findings as part of their overall strategies for engaging in civil resistance.

After the seven hearings for the different thematic audiences, the Tribunal will conclude with a final audience.  In the final audience, the judges will use the information collected and the findings issued in the other hearings to discuss free trade’s adverse impact on the rights of the people, to indicate those responsible for violating the people’s rights, to publicize the violations, and to shed light on the relationships between free trade, violence, and the judicial system.[4]

Structure of the Thematic Audiences and Pre-Audiences

Although the work done in each thematic audience is notable, the bulk of the grassroots component of the Tribunal arguably occurs during the pre-audiences.

The next article in this series will examine the pre-audiences, their structure, their importance to the Tribunal’s mission, and their role in organizing communities practicing civil resistance.

This blog started in 2011 as a space to share stories while the author, as a law student, lived in southern Mexico.
The author is now an attorney, and this blog continues to serve as a space to share information relevant to struggles from below and to the left.
The blog's name references the average price of a cup of coffee - 14 pesos - during the year 2011 at the local cafés in San Cristóbal de Las Casas, Chiapas.
The price of a cup of coffee was the rent money needed to gain access to a work space and wifi for hours on end to upload stories and to conduct research.
The price of a cup of coffee was, and is, a luxury for many people in Chiapas, despite the fact that the coffee served in those cafés is produced by the same people who cannot afford to drink it.
Coffee
Access to work spaces
Access to internet
Access to information
The right to identity
The right to customs
The right to a home
The stories shared here --
All are political.
This space attempts to be a humble contribution to the stories of people fighting for a dignified life, people engaged in the process of constructing un mundo donde quepan muchos mundos.